What About Brass? (Forge World)

today I want to show you part of an old project.
It was made in 2006 for Forge World, resin producer of Games Workshop products.
I've designed and made the Venerable Dark Angel Dreadnought, a big sci-fi robot of the Space Marines Dark Angel army for Warhammer 40K.

The original project was just to design the Dreadnought (using the usual design of the robot and adding D.A. icons) and to sculpt all the details on a resin of a naked one.
I've chosen in first place to give it dynamic, as the usual robots were (very) static. I imagined it in the middle of the battlefield, in motion, fighting the enemy...
So, did I design it.
The studio was pretty happy with my design, so I've started the sculpture part.
Unfortunatelly, I hadn't check the resin they gave me for this work... It was completely unsuable, so I had to entirely sculpt the legs!
(The sarcophage was in a better shape but not so good.)
But it was a great opportunity to make a new kind of work I've never tried till then.

My deception is that the studio actually decided to change some of the stuff I've made (validated on the original design), and sometimes for obscur reason (specially the big skulls... They made some new (ugly) ones...), but directly on my original work... They originally told me that they would do it on a resin cast!

Anyway, why brass?
I use Fimo for the modeling parts, and so I have to bake the model. Then, using plastic card/tubes is not possible.
And I like brass. It's tough enough, and then still easy to work with. And a bit shiny too.
For the legs, I've used brass, guitar strings, Milliput and some resin elements I could work with (after tough cleaning) for the structure and Fimo for all the details. I've added some nail in plastic rod at the end.

Pictures showed here are the model as it is today, damaged by the molding process and the studio work, but I've already changed the skulls by mine. The sword on the right leg is studio made, and I have to say that it's better than mine.
So now I have to clean it, I will do it when I get time...

And I'm proud of the work made on the struture. 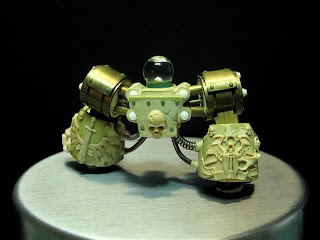 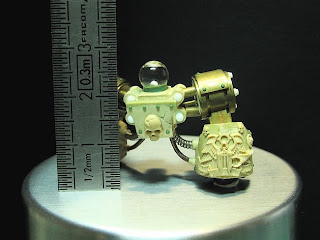 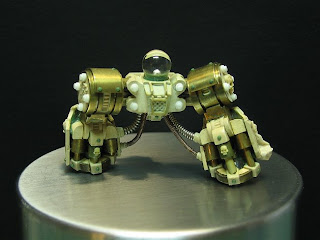 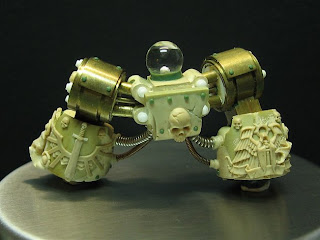