The Beauty And The (Metallic) Beast. 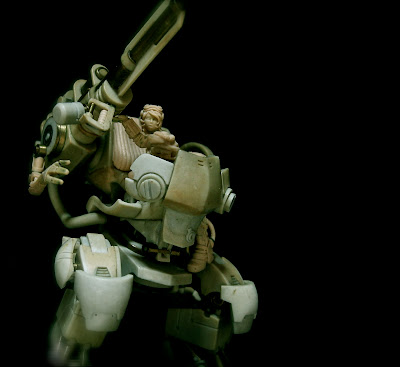 It has been for a long time since I haven't talked and shown a trully new work.

Lot of people asked me about my whereabouts, about my current projects...
Here comes a very interesting and in the same time very special project for me: ONE SHOT.

I could write about this entire model so much pages, and during a so verrrrry long time... But never as long as it took me for getting it finished.

John, Soda Pop Miniatures boss, contacted me during 2009, when Soda Pop was actually in developpement.


And he asked me about Robots, Manga, Girls.

—
I, during my Rackham years, have been very frustrated by lot of projects I had to manage (sometimes —too often— had to finish) but could not sculpt them my own way... Armies like Undeads, dark ones, perverted... Or other kind of projects.
I had to focuse to the Light... Because I knew how to do it, others did not.
— 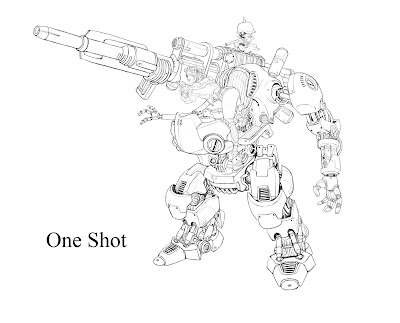 So here comes John, with a totally new project for me: building, studying, sculpting an entire Robot, with miniatures and not Japonese standards —yet close to a manga style—, developped for a non-plastic mass production but with the highest possible quality!!!! Add a sexy girl to that, half manga/half pin-up, and being able to manage the whole thing by my own from a great artwork he would provide.

Seduced, I went for this very difficult project, trully calling into question myself, my abilities, my experience by accepting something I never done, never managed, never approached.

And for this to be even more difficult, I choose to use an almost completely new material for me: Magic Sculp putty.
I by then only tried it for some blades/weapons when I was working in HellDorado Studio with JAG and Thomas, as they were using it often, and it totally convinced me.
But as it is epoxy putty, it's a completely different approach than Fimo...

So a new, difficult project to manage and sculpt basically, but also with a new material and then new technics for me! 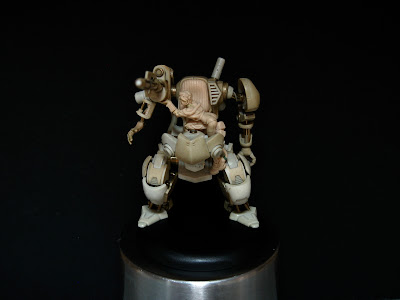 ... And more than 600-700 hours after, during 18 months, lot of tears, crisis in different ways, yelling after myself, after John (of course), shouting after whatever I could blame, whooping, and several (too much) elements broken (several times), I DID IT!

And I can see it was a kind of achievement for me.
I questionned myself several times during this period about my past and future as sculptor, my choices, but when I actually finished it, I was sure that it was worth.

Some of you might not appreciate this model, or think it's not so nice.

But I am very proud of it, how I managed to get this result from a simple illustration and more, to get it done for the mass production.
I, initially, designed the sculpt for a metal production, but I think the robot will be produced in resin. I can't confirm it right now, as I did not yet see the product when I am writing those lines.
I could not be more delighted by this resin news: the robot then will be perfect! Resin is the way for this sculpt!

The Robot is composed of 32 elements. ... 32!
The Pilot ,One Shot, and her Little Friend, Fritz, are both monobloc models.

I will detail each of these 3 models in later blog posts, with lot of pictures, close-ups, different views...
For now, it will just be pictures of the complete One Shot model.

Click on each pics to get a higher size and resolution... And Enjoy! :)

See you soon with lot of other pics!
M. 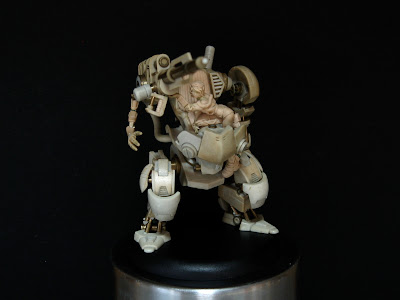 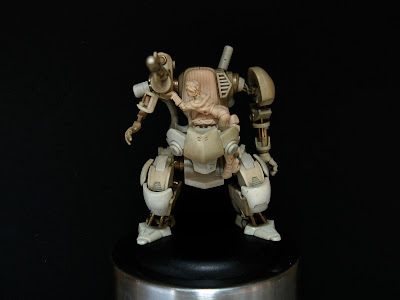 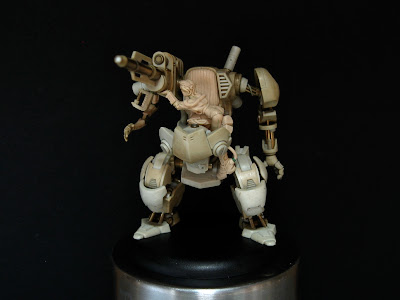 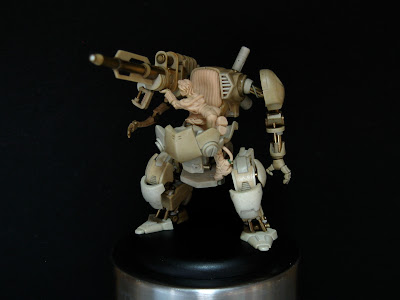 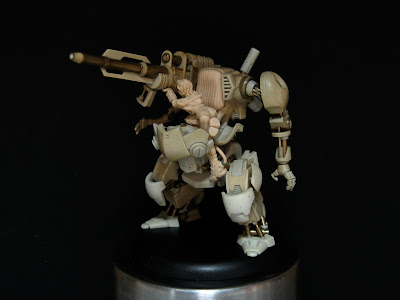 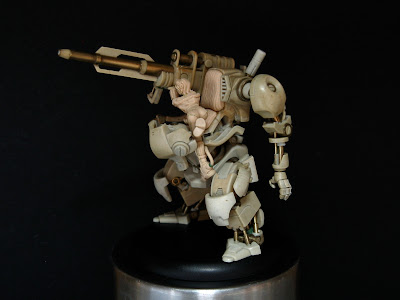 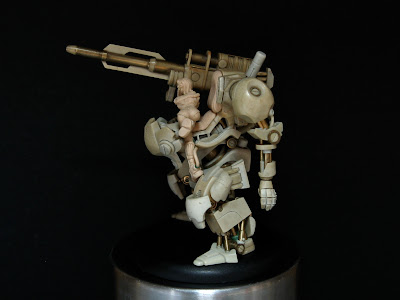 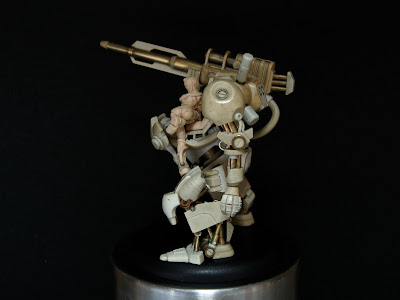 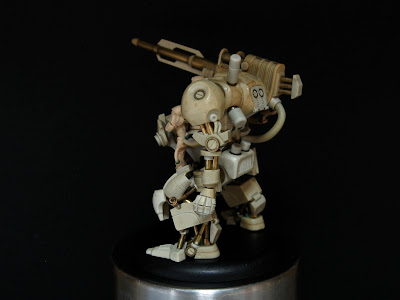 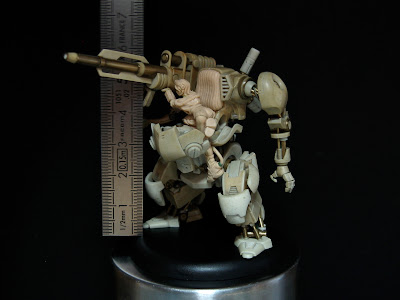 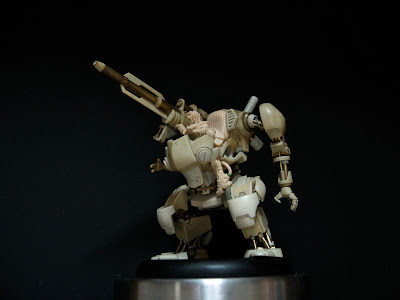 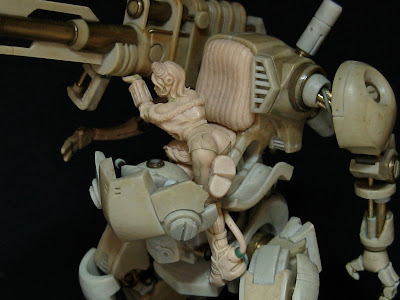 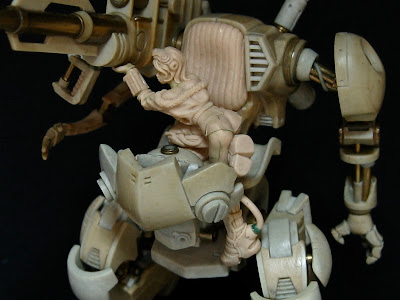 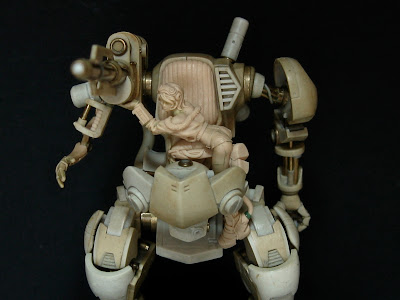 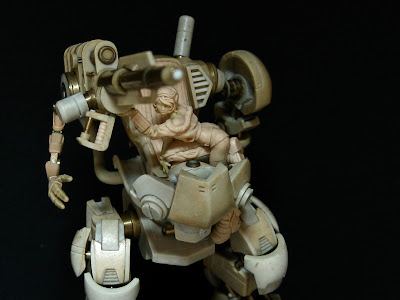 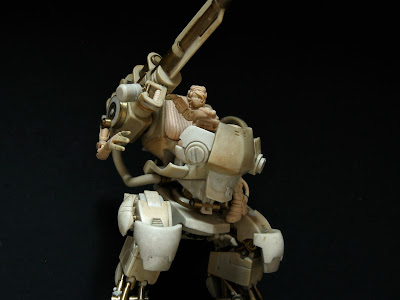 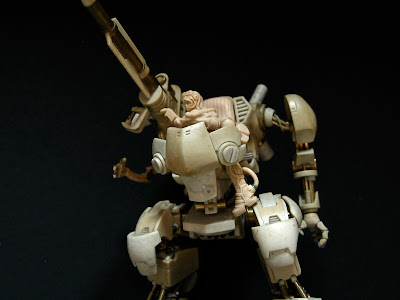 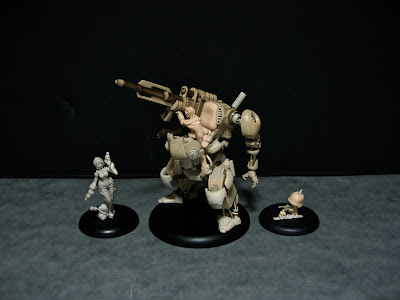 This is one of the most intense and unbelievable pieces I've seen you do (or anybody else for that matter) Incredible detail and with all that mechanical sharpness of edges there is still a dynamic personality present. John showed me some pics of this a few months back and I was near speechless. Absolutely amazing and inspiring work!

Thanks a lot Jason!

Really nice words that are trully cheering me up! :)
That was very interesting and challenging what you just pointed out: a big and static metal structure needing to not seem too heavy, to be kind of dynamic.
I'm happy to apparently have succeed :)

Wow, that is quite a beautiful piece! The lines created by the gun, arms, legs, and body give the hulking robot an unexpected relaxed gracefulness. I also appreciate that you blend different mediums together so seamlessly. There is so much to learn from your work! I will be purchasing this piece immediately when its available!

Thx Anthony,
Actually each type of medium's got its own qualities/defaults. My idea is to use the first, to avoid the second. Then it becomes simple to have an uniform result, keeping in mind that the final product will be in only one uniform material. It's all about the result look! :)

Amazing!!!! Love It!!!
Any idea as of how and when this will be available for purchase?

Thanks Joa :)
It should be out at the end of the month.
Follow Soda Pop news, they for sure let now as soon as it is.

Great work. This type of mini usually wouldnt be my style but this one has all sorts of painting ideas running through my head. Brilliant work.

Its Gorgeous..I cant think of much else to say!!

I am Human... who likes making tiny models ;)
I would love to see this Mecha painted in a rusty way, not clean as brand new, but after having done several battles... Sure there is a potential there!

I just picked up this wonderful miniature yesterday. I was a little surprised that no directions were included given the fact that this piece has so many parts! After contacting Soda Pop, John himself directed me to your site. The detailed images you've provided of the finished piece from various angles will definitely come in handy.
Thanks & best wishes,
Sean

thank you for loving this model and for your nice words.
I heard about the missing notice, and was surprised.
I thought it was included.
I still have to finish my articles, but don't have the time right now, hope to finish them soon, with instructions for building the Beast!
Just for all of you to know:
becareful to place the engine (a square volume and a cylinder attached to) before each side of the cockpit!